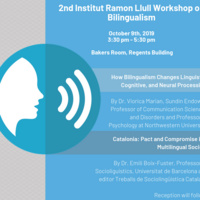 By Dr. Viorica Marian, Sundin Endowed Professor of Communication Sciences and Disorders and Professor of Psychology at Northwestern University

The majority of the world population is bilingual or multilingual. In this talk, I will discuss how learning another language changes the human linguistic, cognitive and neural architectures. I will show that a bilingual's two languages constantly interact and influence each other. Bilinguals’ experience managing two languages sculpts the brain and translates to changes not only in the domain of language (such as language learning and processing), but also in other domains (such as executive function, visual search, and audio-visual integration). Using eye-tracking, mouse-tracking, EEG, and fMRI data, I will show that the highly interactive and dynamic nature of bilingual language processing results in profound changes to cognition and the brain.

Dr. Viorica Marian is the Sundin Endowed Professor of Communication Sciences and Disorders and Professor of Psychology at Northwestern University. She received her PhD from Cornell University and Masters degrees from Emory University and Cornell University. Since 2000, Professor Marian directs the Bilingualism and Psycholinguistics Research Group, funded by the National Institutes of Health.  Her research centers on bilingualism and its consequences for linguistic, cognitive, and neural function. Her work has been disseminated in over 100 publications and over 200 conference presentations and receives extensive press coverage (http://bilingualism.northwestern.edu (new window)/).

Catalonia: Pact and Compromise in a Multilingual Society

After a short presentation of the Catalan-speaking territories, the talk will focus on  a discussion of the main social challenges of the Catalan language community , namely, devaluation, desintegration, division, disappearance, and demobilization. The talk will end with a projection of the possible future of Catalan , as a medium-sized linguistic community in current Europe.

Full professor of Sociolinguistics at University of Barcelona).  He has been visiting professor at the universities of Marburg and Tübingen (Germany), and Montpellier (France). He is the current general editor of the academic journal Treballs de Sociolingüística Catalana and he was president of the Association of Catalan Sociolinguists (SCS).  He won the “Serra i Moret” award with the essay “Language and good citizenship”. He has carried out research on intergenerational language transmission, sociolects, medium-sized linguisic communities, and language planning in Spain and Andorra.He regularly teaches Sociolinguistics , Language Planning, and History of the Catalan Language.

I really enjoyed learning about Bilingualism since I am bilingual and speak both English and Spanish. It was a very enriching event and learned a lot about myself in the process.