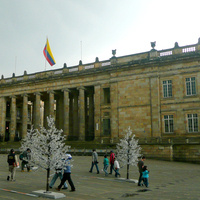 Senator Galán is a Georgetown alumnus (MSFS 2003) and an influential politician in Colombia’s Liberal Party. In the Senate, he works closely on issues relating to the peace accord including victims’ rights and land reform. Senator Galán is also a presidential pre-candidate in the 2018 elections and the son of former presidential candidate Luis Carlos Galán, who was assassinated in 1989.

Senator Galán completed his bachelor's degree in education at Universidad Pedagógica Nacional. He later went on to complete his first master's degree in Political Science at Institut d'Etudes Politiques in Paris. He chose as his thesis topic the History of New Liberalism, a political movement created and led by his late father in Colombia. In 2001, he travelled to Washington, D.C. where he went on to complete a Master's in International Relations and Security at Georgetown University School of Foreign Service.

After completing his studies and working in the private sector, Senator Galán returned to Colombia and ran for a Senate position in 2006 as part of the Liberal Party. During his first term, he was an active member of the Second Commission which dealt with international and security issues. In 2010 Senator Galán was elected for a second term and joined the First Commission, which works on matters of justice and constitutional rights. He helped author many laws during this term, including laws that called for addiction to be treated as an illness not a crime and intelligence and counterintelligence laws meant to better support the mission of Colombia's intelligence services. Senator Galán was elected to serve his third and current term in 2014. He currently serves as the President of the Commission on the Law of Victim's Rights, which monitors the implementation of this piece of law.