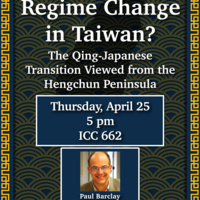 Regime Change in Taiwan? The Qing-Japanese Transition Viewed from the Hengchun Peninsula

It is a truism of Taiwan historiography that the Qing dynasty failed to govern the “Aborigine District” in the island’s mountainous interior. In contrast, runs the conventional wisdom, industrialized Japan pacified the stubborn highlanders after annexing Taiwan as a colony in 1895, thereby bringing the whole island under central administration for the first time. There is evidence to support this entrenched position. Nonetheless, the “regime change” paradigm uncritically accepts a colonial era discourse that justified Japan’s occupation by invoking the specter of Qing impotence. This paradigm also overstates the Japanese state’s ability to cleanly break with the Qing past. As a corrective, this talk demonstrates where, how, and why the Japanese colonial state abandoned its loudly announced goal to administratively integrate all of Taiwan, after two decades of trying to solve the Qing state’s “incomplete sovereignty” problem. Between the years 1902 and 1914, the Taiwan Government General incorporated carefully selected portions of the former “Aborigine District” into its administrative grid. It halted this process in 1915. As this paper shows, the incorporated settlements were limited to those directly impacted by post-1875 Qing infrastructure projects and pacification campaigns. The history of “savage border” boundary-marking in Taiwan, therefore, suggests that the spatial limits of central administration were largely prefigured before Japan’s 1895 annexation, and forged after the Qing responded to an earlier 1874 Japanese invasion with policies to “open the mountains and pacify the indigenes.”

Paul D. Barclay is Professor of History and Chair of the Asian Studies Program at Lafayette College in Easton, PA. He is the general editor of the digital repository East Asia Image Collection (http://digital.lafayette.edu/collections/eastasia) and author of Outcasts of Empire: Japanese Rule on Taiwan's "Savage Border" 1874-1945 (Oakland: University of California Press, 2018). Barclay’s research has received support from the National Endowment from the Humanities, the Social Science Research Council, the Japanese Council for the Promotion of Science, and the Taiwan Ministry of Foreign Affairs.