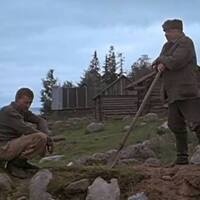 "Cold Summer of 53" (Холодное лето 53-го) (1988) is an impressive story of two political exiles struggling for survival in a distant village in the north of Soviet Russia. Years of starvation and blatant injustice have almost broken their spirit. However, when the village is attacked by a gang of criminals, teh villagers take up arms to destroy the gang and restore their dignity.

This movie appeared in the Soviet Union during the Perestroika years and became extremely influential. The movie is crucial for the understanding of Russian historical experience in 20th Century, as well as the history of the GULAG and exile.

In Russian, with subtitles. Pizza and light refreshments provided.