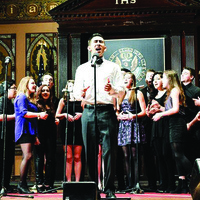 The DC A Cappella Festival (DCAF) is the annual concert co-hosted by the Phantoms, GU’s first co-ed a cappella group, and the GraceNotes, GU’s first all-female a cappella group. Each weekend’s performance features different guest groups and programs include songs ranging from oldies to rock to pop, mixing traditional and eclectic styles and featuring debuts of new arrangements.