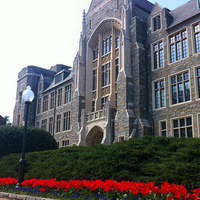 March's first colloquium speaker is Justine Cassell from Carnegie Mellon University. The talk will be held in WGR 206 from 3:30-4:30pm with a reception to follow immediately afterward in WGR 308.

Abstract: In this talk I propose a particular sociocultural approach to the study of the so-called "social emotions" - intrinsically dyadic states such as rapport, friendship, intimacy, interpersonal closeness. I rely on this approach to describe the surface level observable verbal and nonverbal behaviors that function to evoke, deepen, demonstrate, and destroy these dyadic social emotions. I highlight the need for differentiating the observable behaviors from inferable underlying states by demonstrating how putatively negative behaviors may play a positive role in rapport. Finally, I describe some important roles that these often discounted aspects of human behavior play in learning, commercial transactions, and other facets of day-to-day life. Each step of this talk is illustrated by experiments that involve human-human and human-computer character interaction. I include novel approaches to modeling and generating behaviors for human-character interaction on the basis of the human-human corpora. And finally, lessons are drawn both for the study of human behavior, and the improved design of technologies capable of engaging in interaction with people over the long-term.