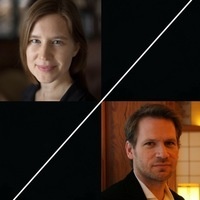 Join us for a reading and talk with Eula Biss and John Freeman.

Eula Biss is most recently the author of On Immunity: An Inoculation, which was named one of the 10 Best Books of 2014 by The New York Times Book Review. Her second book, Notes from No Man's Land: American Essays, won the National Book Critics Circle Award for criticism in 2010. Her first book, The Balloonists, was published by Hanging Loose Press in 2002. Her writing has been supported by a Guggenheim Fellowship, a Howard Foundation Fellowship, an NEA Literature Fellowship, and a Jaffe Writers' Award. She holds a BA in nonfiction writing from Hampshire College and a MFA in nonfiction writing from the University of Iowa. Her essays have recently appeared in The Believer, Harper's, and The New York Times Magazine.

John Freeman is an award-winning writer, book critic, and poet who has written for numerous publications, including The New York Times Book Review, The Los Angeles Times, The Guardian, and The Wall Street Journal. In 2007, he won the James Patterson PageTurner Award. He is most recently the author of the collection of poems, Maps (Copper Canyon Press, 2017).

Free and open to the public.