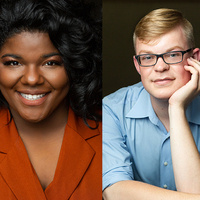 This program features two 2019-20 members of the Washington National Opera’s Domingo-Cafritz Young Artist Program, and a work by Georgetown University Music Program Prof. Carlos Simon. Mezzo-soprano Rehanna Thelwell has been applauded for her “superb and expressive power” by the South Florida Classical Review while her collaborations have been described as a “tour de force” by the St. Louis Post-Dispatch. Her voice has been commended as “one of beauty and distinction” with “rich vocal qualities” by Palm Beach Arts Paper and Arizona Daily Sun. New York based pianist/vocal coach William Woodard made his Carnegie Hall debut participating in Renée Fleming’s SongStudio.

The Georgetown University Music Program’s Friday Music Series features acclaimed artists in free concerts on Friday afternoons at 12:30 p.m. in McNeir Hall, and integrated into a new undergraduate course (MUSC 200) titled Live Music in Context. Each concert is followed by a Q&A with the performers.