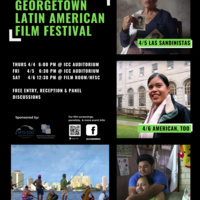 The Georgetown Latin American Film Festival organized by LatAm Council with support from the Center for Latin American Studies, the SFS Centennial, and the Kalmanovitz Initiative for Labor and the Working Poor, invites Georgetown University students, faculty, staff, alumni, policymakers, and the greater Washington community to explore and discuss Latin America through film.

We invite all attendees to join us for an opening reception at 6:00 pm in the ICC Galleria on Thursday, April 4th.

The Screening Schedule is as follows:

“Viva El Vedado” presents the history of the Havana neighborhood of El Vedado from the last quarter of the 19th century through the Cuban Revolution and highlights its varied and outstanding architecture. Known as a cultural center of Havana, Vedado is particularly notable for its unique collection of Cuban architecture of the 20th century. “Viva El Vedado” was made over two-and-a-half years by cinematographer and director Stanley Staniski and producer Mary Wilkie Ebrahimi who lived in El Vedado before the Revolution. The documentary features interviews with architectural historian Eduardo Luis Rodríguez and urban planner Secundino Fernández as well as with Gustavo López González, assistant director of the National Museum of Decorative Arts, located in El Vedado. The film’s goal is to introduce its audiences to the neighborhood’s remarkable architecture, its vibrant life, and the need for preserving Vedado as part of Havana’s heritage. It is a glimpse beyond tourist fantasies and stereotypes, a rare view of one of Havana’s most important neighborhoods.

¡Las Sandinistas! uncovers the untold stories of women who shattered barriers to lead combat and social reform during Nicaragua’s 1979 Sandinista Revolution, and the ensuing US-backed Contra War, as these same women continue as leaders in the struggle against their current government's suppression of democracy and women's rights.

The film is centered around the personal stories of Dora Maria Téllez, the young medical student who became a major Sandinista General, and four of her revolutionary allies - Nicaraguan women who overcame traditional gender barriers and subverted stereotypes to lead rebel troops in battle and reshape their country with landmark social reform. ¡Las Sandinistas! exposes a watershed moment in history when thousands of women transformed society’s definition of womanhood and leadership before facing renewed marginalization by their male peers after the wars ended. Now, 35 years later, amidst staggering levels of gender violence in Nicaragua, these same women brave the streets once again to lead popular movements for equality and democracy.

Saturday, April 6th: American, Too and The Unafraid

'American, Too' is a short documentary film, told through the lens of a first generation Honduran-American filmmaker and master's student at Georgetown University. The film explores the identity of young people from the Central American diaspora. In the context of negative rhetoric from the U.S government along with changing policies that affect hundreds of thousands of immigrants from Central America.

'The Unafraid' is a feature-length documentary that follows the personal lives of three DACA students in Georgia, a state that has banned them from attending their top state universities and disqualifies them from receiving in-state tuition at any other public college. Shot in an observational style over a period of four years, this film takes an intimate look at the lives of Alejandro, Silvia, and Aldo as they navigate activism, pursuing their right to education, and fighting for the rights of their families and communities. The Unafraid shows us what it means to grow up both American and undocumented in the United States.

Open to the public, closed to the press.