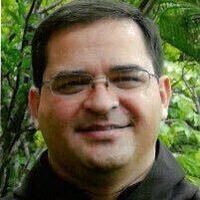 swaldo Escobar Aguilar is the bishop of the Diocese of Chalatenango, El Salvador, where he was born in 1968. In the 1980s, Bishop Escobar’s family was forced to flee Chalatenango during the country’s civil war in which some of his family members were killed or disappeared. He did not return there until he was was named bishop of the diocese by Pope Francis in 2016. His surviving family members, after facing threats and forced displacement, now live in San Salvador and in the US. Learning about his native country’s St. Oscar Romero has helped him understand the war of his native country and work through the trauma he experienced, which, in turn, helps him to help those who are still facing similar life-long challenges. Bishop Escobar took his solemn vows in December 1995. He studied Philosophy and Theology at the Francisco Marroquín University of Guatemala and obtained a master's degree in Mysticism and Spirituality at the Teresiano Internacional Center in Ávila (Spain) and graduated with a degree in Spiritual Theology from the Pontifical Facoltà del Teresianum in Rome. He was ordained on March 19, 1996 and he served as provincial superior of Central America from 2013 to 2016; since 2014 he has served as president of the Conference of Religious of El Salvador. He is in Washington visiting the Salvadoran Catholic diaspora who hail from Chalatenango.