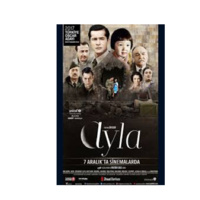 WHEN: Friday, February 15 @ 5pm | WHERE: HFSC Film Screening Room
Join the Turkish Student Association and the students of Türkçe Bir for the next feature in a semester-long Turkish film festival: Ayla: The Daughter of War, a movie set during the Korean War based on the true story of a Turkish soldier and a young Korean girl who form a close friendship but are separated when the soldier must return home.