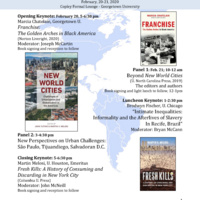 Urban Challenges in Globalizing Times: Making Cities and Urban Lives across the Americas

All six cities saw concentrations of wealth; all included populations facing marginal lives—often among immigrants from near and far. Informal economies opened chances for some on the margins. Yet informality made spaces for illegality and criminality, leading to carceral regimes of formal coercion in prosperous regions of North America; in cities concentrating persistent poverty, violence came in waves that proved hard to contain, reinforcing marginality and insecurities.

Still, city people everywhere worked for better lives. In the barrios of Mexico City and the favelas of Rio, they built homes and neighborhoods with their own hands—and pressed regimes for basic services and political rights. In the more prosperous cities of North America (and in Buenos Aires, too), political movements demanded racial, ethnic, labor, and gender rights. At the polls and in the streets, people claimed real gains. Yet nothing blunted trajectories toward concentrating wealth and power, middle sector insecurities, and underclass lives shaped by marginality and informality, illegality and violence. Often, the mobilizations that claimed limited rights and services saw their energies sapped when formal electoral “democratizations” claimed urban and national political arenas.

Cities across the hemisphere and the world continue to grow and face challenges providing employment and services. Concentrations of wealth persist; middle sector insecurities abound; marginal lives defined by poverty and insecurity are everywhere—in differing proportions. A new round of political movements has risen across the globe, often led by the youth of frustrated middle classes. They demand effective rights, secure lives, and possible futures in the face of the failures of neoliberal democratization (once a “Washington Consensus”) in a world defined by urban concentrations.
The urban challenges of the twenty-first century emerged from the transformations of the twentieth. We will gather to continue thinking about the rise of our globalized urban world and why it has yet to deliver on promises of shared welfare and effective political participations.