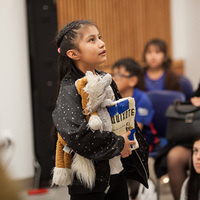 Co-sponsored by the Laboratory for Global Performance and Politics, the Georgetown Humanities Initiative, and the Department of Performing Arts

Kid Quixotes are 15 Spanish-speaking immigrants ages 6 to 17 who, since the fall of 2016, have been translating and adapting and performing the novel Don Quixote as a bilingual, musical theater piece. They are retelling the tale as their own, reimagining the story of an old man in Spain in the late 1500s as a story of Spanish-speaking immigrant children living in Brooklyn today. A “Greek Chorus” of children sings original songs written by the students, songs inspired by the novel and by their own lives.

The group travels all around New York City and beyond, presenting their work in private homes of the rich and poor, college classrooms, including Columbia, NYU, Hunter College, Yale, Drexel, and Johns Hopkins, and government offices, including the consulates of Mexico and Ecuador and New York City Hall. The message of these voyages, for the actors and for audiences, is that the kids belong, in all neighborhoods and in the worlds of higher education and civic power. They belong in this country. The show runs about one hour, followed by conversation with the audience.