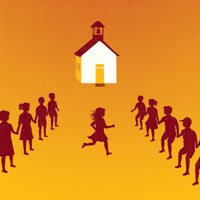 Our Class tells the powerful, sweeping story of 10 Polish classmates—five Catholic and five Jewish—over 80 years of their lives from the 1920s to early 2000s. As they grow up, their lives take dramatically unexpected turns as their country is torn apart by invading Soviet and German armies. Friend betrays friend and violence quickly escalates, reaching a crescendo that forever haunts the survivors. Winner of the prestigious Nike Literary Award, and based on true events in the Polish town of Jedwabne, Our Class has profoundly affected audiences around the world since its premiere at London's National Theatre. Prof. Derek Goldman reunites with members of the artistic team from his celebrated 2012 professional production at Theater J for a new student production of this urgently timely play that cuts to the core of Georgetown's mission and values. This production is part of the Georgetown University Theater & Performance Studies Program’s 2018-19 season, Friends, Far & Near.

Read more about Our Class and special events offered in conjunction with the show.