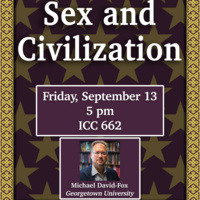 This paper, a shortened version of one chapter of a book in progress entitled Crucibles of Power: Smolensk under Nazi and Soviet Rule, focuses on the extensive sexual relationships between German men and Russian women in Smolensk during the German occupation of 1941-43. The paper provides an interpretive synthesis of the evidence in Russian and German on sexual violence, rape, and children fathered by Wehrmacht soldiers on the Eastern Front. It suggests that no other aspect of the Nazi German-Soviet Russian encounter was as fraught, or taboo, as the spectacle of young Russian women, dressed up in fine clothing in conditions of extreme scarcity, speaking pigeon German and holding hands with Wehrmacht soldiers. At the heart of the paper are rare testimonies from a German-speaking Swiss Red Cross nurse and Russian Komsomolki (female members of the Communist Youth League) conducting underground political work in the city of Smolensk, as well as from Russian women physicians and other professionals. Suggesting that German militarized masculinity stood in as a metaphor for conquest and domination, the paper shows how German treatment of women became a central issue in the cross-cultural encounter between Germans and Russians in Smolensk. It also fed a broader, consequential debate over which civilization was superior, Germany’s “New Europe” or Russian culture in its socialist or Stalin-era incarnation.