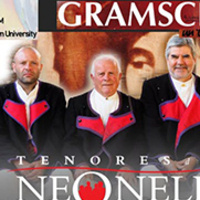 The “Tenores di Neoneli” are a group of polyphonic singers from Sardinia (Italy).  Founded in the little town of Neoneli in 1976, the group interprets the ancient Sardinian tradition of “a tenore” singing.  A tenore singing is performed by groups of four male singers standing next to each other in a circle or semi-circle. Each singer has a distinct pitch and role: the “boghe” is the solo voice (typically singing poetic text or lyrics); the “mesuboghe” is the countertenor, the “contra” is the contralto voice, and the “basciu” is the bass voice.  This type of singing is believed to be one of the oldest forms of vocal polyphony. According to Sardinian tradition, the mesuboghe imitates the sound of the wind, the contra the bleating of a sheep, and the basciu the lowing of a cow. In 2005, UNESCO recognized “a tenore” singing as an example of “intangible cultural heritage”. The Tenores di Neoneli are among the most popular, internationally renowned “a tenore” groups. Currently, the four members of the Tenores are founding member Tonino Cau (basciu), Roberto Dessi’ (contra), Ivo Marras (mesuboghe) and Angelo Piras (boghe), son of Peppeloisu Piras, iconic boghe and another founding member of the group.

Their performance with Georgetown University’s Department of Performing Arts is part of the Tenores’ first series of exhibitions ever in the U.S. Capital. The Tenores will present one of their latest creation based on the life of Antonio Gramsci. Born in 1891 in the little Sardinian town of Ales, Gramsci is thought of as one of the world’s greatest intellectuals and political theorists. Fourth of seven children, Antonio Gramsci grew up in Sardinia until 1911 when he left the island to attend college in Turin. There, he came in contact with the Socialist Youth Federation, joined the Socialist Party and became involved with worker organizing. In 1921, he co-founded the Italian Communist Party and in 1924 was elected to Italy’s Chamber of Deputies. After the Communist Party was outlawed by the fascist regime, Gramsci was arrested and imprisoned. At the trial, the fascist prosecutor argued, “We must stop his brain from working for 20 years.” Gramsci was in prison from 1926 until his death in 1937. His brain, however, did not stop working. While in prison, he carried out wide-ranging historical and theoretical studies of culture, politics, philosophy, social science, and possible strategies to achieve societal change. Gramsci’s prison writings were published posthumously as Quaderni dal Carcere (Prison Notebooks) and Lettere dal carcere (Letters from Prison). The performance Gramsci: Un’omine, una vida (a man, a life) is part of the Tenores’ effort to sing the lives of Sardinian men and women who have contributed in significant ways to the history of Sardinia and Italy. The Tenores will also perform popular pieces from their extensive repertoire.

All singing in the Sardinian language.