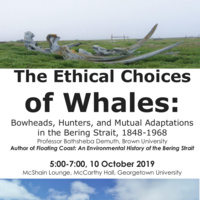 The Ethical Choices of Whales: Bowheads, Hunters, and Mutual Adaptations in the Bering Strait, 1848-1968

On October 10th, Bathsheba Demuth, assistant professor of environmental history in the Institute at Brown University for Environment and Society, will discuss her ongoing work on the history of whale culture in the Arctic, and her recent book, Floating Coast: An Environmental History of the Bering Strait.

Bathsheba specializes in the lands and seas of the Russian and North American Arctic. Her interests in northern environments and cultures began when she was 18 and moved to the village of Old Crow in the Yukon, where she spent several years training sled dogs. In the years since, she has visited and lived in Arctic communities across Eurasia and North America. Her writing has recently appeared in publications from the American Historical Review to the New Yorker.

Bathsheba's first book, Floating Coast: An Environmental History of the Arctic is a New York Times editor's choice and one of the most popular, important, and beautifully written manuscripts in environmental history to be published in the last decade.