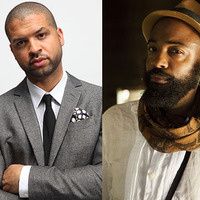 Pianist, composer and educator Jason Moran, in his second year as Distinguished Artist in Residence at Georgetown University, will discuss with Oscar®-nominated cinematographer Bradford Young (Selma, Arrival) the life, music, and legacy of jazz pioneer James Reese Europe (1880-1919). Moran and Young will talk about their collaboration on The Absence of Ruin, a tribute to Europe which will make its U.S. premiere at the Kennedy Center (details below), and will also discuss the history of erasure. Born in Mobile, Alabama, Europe moved with his family to DC when he was 10 and attended the M Street School—now Dunbar High School. In 1910, Europe organized the Clef Club, an organization that advocated for African-Americans in the music industry. The Clef Club Orchestra performed at Carnegie Hall in 1912 and featured the compositions of African-American composers Harry T. Burleigh and Samuel Coleridge-Taylor. During World War I, Europe served as a commissioned officer in the New York Army National Guard, the 369th Harlem Hell Fighters, directing the regimental band. His post-war activities included a series of highly influential recordings for Pathê Records.

Experience James Reese Europe’s music and influence live at the Kennedy Center with Artistic Director for Jazz Jason Moran’s U.S. premiere of The Absence of Ruin. Through new arrangements and stunning visual media, Moran will explore Europe’s deep musical catalogue and how his achievements continue to affect today’s culture and sound on December 8 at 8 p.m. in the Eisenhower Theater.