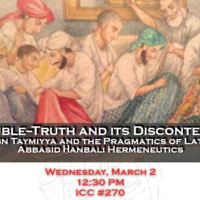 Double-Truth and its Discontents? Ibn Taymiyya and the Pragmatics of Late-Abbasid Ḥanbalī Hermeneutics" with Rodrigo Adem

The Ḥanbalī school of Islamic legal interpretation is most commonly associated with theological "literalism."  However, this characterization fails to acknowledge key developments in the history of Islamic theology to which Ḥanbalī theology was not impervious.  Most central here are contentions on the pragmatics of human communication and divine revelation as formulated in the discourse of uṣūl al-fiqhand kalām: The implications of such discursive turns for late Abbasid Ḥanbalism provide a window into understanding controversial theologian Ibn Taymiyya's break with that school and his supposed "rejection of metaphor" in language.  As can be shown, rather than reject metaphor, Ibn Taymiyya argues for the incoherence of "literal meaning" as semantic category.  This lecture reorients our understanding of Ibn Taymiyya's thesis with broader reference to Muslim social and intellectual history, as well as the controversy of "double-truth" in its Islamic context.

Rodrigo Adem received his PhD in Islamic Thought from the University of Chicago in 2015 and is currently a postdoctoral fellow in the Religious Studies department at the University of North Carolina - Chapel Hill.  His research focuses on the meeting point of theology, hermeneutics, and religious identity in classical Islam.