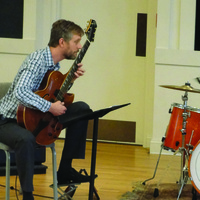 The Georgetown University Music Program’s Friday Music Series features acclaimed artists in free concerts on Friday afternoons now at 12:30 p.m. in McNeir Hall, and integrated into a new undergraduate course (MUSC 200) titled Live Music in Context. Each concert will be followed by a Q&A.