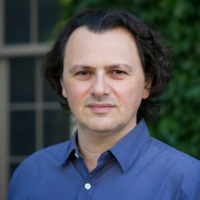 Professor Marco Battaglini will deliver his public lecture on "Social Connections in Politics (and other settings)" on Monday, January 13 at 4pm in McShain Large Lounge on the GU campus.

Professor Battaglini is the Edward Meyer Professor of Economics at Cornell University. He  will visit the Economics Department for the week of January 13-17 as a part of the GCER Distinguished Visitor program. He received his PhD from Northwestern University in 2000 and has held faculty positions at Princeton University and the Institute for Advanced Study. His research lies in the intersection of game theory and political economy. One the most prominent scholars in this area, Professor Battaglini's innovative work on the political dynamics of debt and fiscal policy influenced the way economists and political scientists think about inter-temporal trade-offs in the political sphere. His published work appears in top outlets in both economics and political science. These include, among others, American Economic Review, Econometrica, the Quarterly Journal of Economics, the American Political Science Review, and the Quarterly Journal of Political Science. Professor Battaglini is a Fellow of the Econometric Society and, in 2009, a recipient of the Carlo Alberto Medal awarded to an Italian economist under the age of 40.