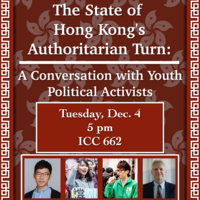 The State of Hong Kong’s Authoritarian Turn: A Conversation with Youth Political Activists

On the eve of the transfer of Hong Kong’s sovereignty from British to Chinese hands back in 1997, many in the West watched with cautious optimism in hopes that China would gradually liberate and become more like Hong Kong. Twenty one years on, however, the exact opposite seems to be happening. As President Xi Jinping continues to crack down on domestic civil society and tightens his grip on China’s peripheries, lately Hong Kong often finds itself making international headlines. In this former British colony, political incarceration is now the new norm; the pro-independence Hong Kong National Party is officially outlawed; prominent opposition figures are forbidden from contesting in legislative elections while elected legislators have been removed from office; the recent expulsion of Victor Mallet, the Financial Times Asia news editor, underscores the sharp decline in press freedom; one after another, massive Beijing-backed infrastructure projects promise to blur the Hong Kong-China boundary.

The erosion of Hong Kong’s autonomy and human rights is hard to deny. But how did it begin to happen? How does it mirror aggressive Chinese expansionism in the region today? What are its global implications at a time when the world is confronted by democratic backsliding? What kind of foreign policy should the U.S. to pursue in response? Three members of Demosisto, the Hong Kong-based youth political group that advocates self-determination, will share their personal experiences and thoughts on Hong Kong’s possible futures.

NATHAN LAW, Demosisto’s founding chairman, was the former secretary general of the Hong Kong Federation of Students. In 2016, he became Asia’s youngest ever democratically-elected lawmaker when, at age 23, he won a seat in the Hong Kong Legislative Council, before Beijing intervened and removed him from office. He was also one of Hong Kong’s first three political prisoners since 1997, having been sentenced last year, along with Joshua Wong and Alex Chow, for their leadership roles in the Umbrella Movement of 2014. The trio was subsequently nominated by a bipartisan group of U.S. Congressional members for this year’s Nobel Peace Prize. He’s a Cultural Studies student at Lingnan University in Hong Kong.

AGNES CHOW first stepped into the public spotlight in 2012 when she served as a spokeswoman for Scholarism, the student-activist group in Hong Kong that spearheaded protests against the Chinese government’s ultimately unsuccessful attempt to introduce pro-Beijing patriotic education in the public school curriculum. From 2016 to 2017, she was Demosisto’s founding deputy secretary general. Early this year, she was banned from appearing on the election ballot after she declared her candidacy for the Legislative Council seat vacated by Nathan’s disqualification. She’s a Government and International Studies student at Hong Kong Baptist University.

JEFFREY NGO is an activist historian and the chief researcher for Demosisto. His writing on Hong Kong and Taiwan has appeared in Time magazine, the Wall Street Journal, the New York Times, the Washington Post, the Hong Kong Free Press, and Dissent. He has co-organized multiple solidarity rallies in Washington and New York to support Hong Kong in the past and has worked for Nathan’s 2016 Legislative Council election campaign. In 2017–18, he was a visiting scholar at the University of Toronto. Having graduated from New York University, he’s pursuing his Ph.D. at Georgetown’s History Department.

MICHAEL DAVIS, a Professor of Law and International Affairs at Jindal Global University in India, is currently a Residential Fellow at the Woodrow Wilson International Center for Scholars, where he’s researching a project entitled “Reversing the Liberal Retreat and Establishing Constitutionalism in Emerging Democracies in Asia.” A longtime professor at the University of Hong Kong’s Law Faculty until 2016, he’s the author or editor of several books, including Constitutional Confrontation in Hong Kong (1990), Human Rights and Chinese Values (1995), and International Intervention in the Post-Cold War World (2004). He was a founding member of the Article 23 Concern Group against proposed national security laws in 2003 and won the Human Rights Press Award for Commentary in 2014 from the Foreign Correspondents’ Club in Hong Kong.